The Inquisition of Myriad Light

Here’s my entry for the June RPG Blog Carnival on organizations in roleplaying games. The idea of organizations as class isn’t new, and has been done brilliantly before over at Legacy of the Bieth and Thor Takes D&D.

If there was anything I wanted to do differently with the idea, it was in shifting abilities away from mechanical combat stuff and more towards the social roleplayie advantages (and drawbacks) belonging to an organization could confer. So, without further ado, the Inquisition of Myriad Light. 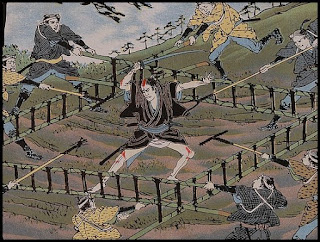 The Inquisition of Myriad Light

Like the guardsmen who ward against thieves and cutthroats by torchlight, the Inquisition of Myriad Light is the light that stands between society and the occult forces that threaten it from within. Vampires, skinstealers, and cultists who lurk the dark alleyways of the city. Werewolves and hedge witches plotting evil from their cellars and dens on the outskirts of town. At first glance, human, no different from you or me. But the true danger of these threats is not that one will mistake them for human, but that one will mistake a human for them.

The job of an Inquisitor is to ask questions, gather information, then capture, using the signature weapon of their order, the Sasumata. Once captured, a target’s fate is determined by an Inquisition Judge. 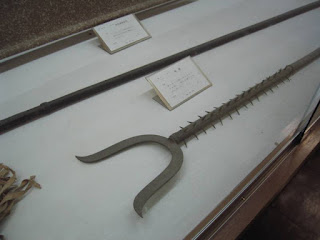 The Inquisition readily welcomes any person into their ranks as an Initiate to stand against the dark of society, no matter the person’s past. Becoming an initiate requires but one thing, a ward against infiltration by the very creatures they hunt: to drink from a cup of holy water, blessed by the highest priest in the lands.

Initiates are expected to follow the rules of the major good religion of the land, but the core rule of the order is to never take the life of an innocent; innocent, defined as anyone not bearing the taint of the occult. The vilest criminal is deserving of their life, but no mercy is spared for those who serve as conduits for the evils that prey on humanity.

Initiate
Weapon of the Inquisition: Initiates train daily in the use of the Sasumata, a weapon designed foremost for capture. Gain proficiency in this weapon.
Required Reading: In preparation for their Acolyte test, Initiates devote themselves to religious study. Gain knowledge of the major religious teachings of the land.

Acolyte
Robes of the Inquisition: As an Acolyte you are given the Inquisition robes, granting armor as leather. Commoners interact with you with a mixture of fear and respect, and will readily answer your questions; assuming they have nothing to hide.
In-Field Knowledge: Your time hunting society’s monsters has given you knowledge of dangerous creatures and the occult.

Inquisitor
Inquisitor of the Order: You have the right to requisition a number of Acolytes for the purpose of investigating occult activity in an area.

Downtime requirement: 2 days/wk administrative
Promotion: 1 year as an Inquisitor, and the befriending of a powerful ally or removal of a formidable rival within the order.

Posted by Tangled Cloaks at 8:52 PM